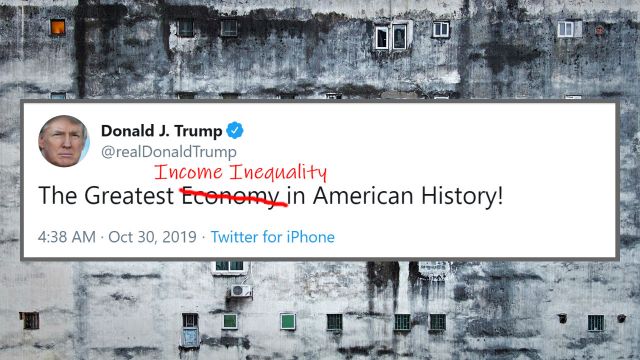 “We can have democracy in this country or we can have great wealth concentrated in the hands of a few, but we cannot have both.”
~ Supreme Court Justice Louis D. Brandeis

Donald Trump launched into his day at 7:30 this morning by brag-tweeting about the state of the economy.

The Greatest Economy in American History!

He then promptly returned to attacking Democrats, the impeachment inquiry, and the news media. All in all, a normal kind of morning for the child king.

But his “greatest economy” tweet stands in stark contrast to a study released last month by the Census Bureau that reports something truly historic: income inequality in the U.S. is at its highest level in the 50 years since the Bureau started tracking the data.

END_OF_DOCUMENT_TOKEN_TO_BE_REPLACED 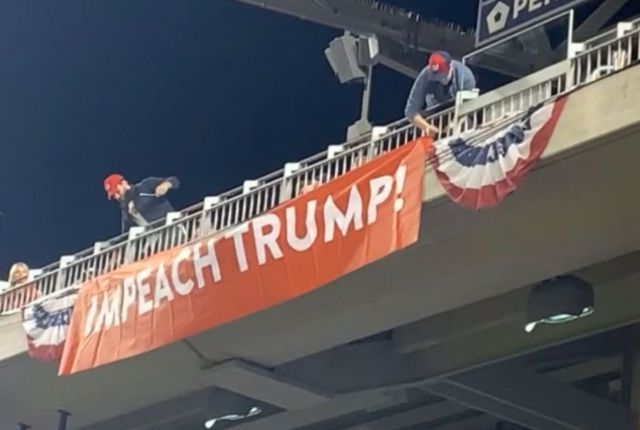 Donald Trump wandered out into the real world last night, far from the cloistered world of his cult followers, away from pre-screened, handpicked audiences. It did not go well for the orange narcissist.

In his two plus years in Washington, Trump has never ventured into the real city, has never mingled with people whom he supposedly represents. Where other presidents routinely dined at local establishments, Trump has gone out for dinner only at his Trump International Hotel. He has snubbed traditional DC social events like the White House Correspondents Dinner and the Kennedy Center Honors. And until last night, he had never been to a Washington baseball game, unlike every predecessor who served when DC had a team. He has remained firmly within the Trump bubble.

END_OF_DOCUMENT_TOKEN_TO_BE_REPLACED

When the World Series rolls around each year, I find myself reliving a very pleasant memory — the time I went to the World Series with Richard Nixon, at the time still serving as President of the United States.

I was a freshman at American University in Washington, DC at the time of the 1969 World Series, the year of the Miracle Mets. Saturday, October 11 was a warm fall day in DC. Game 1 was due to get underway in Baltimore in the afternoon. I was hanging out in my dorm room when one of the guys who lived across the hall knocked, came in, and waggled a handful of World Series tickets in the air. “I scored six tickets for today’s game. Wanna go?”

END_OF_DOCUMENT_TOKEN_TO_BE_REPLACED 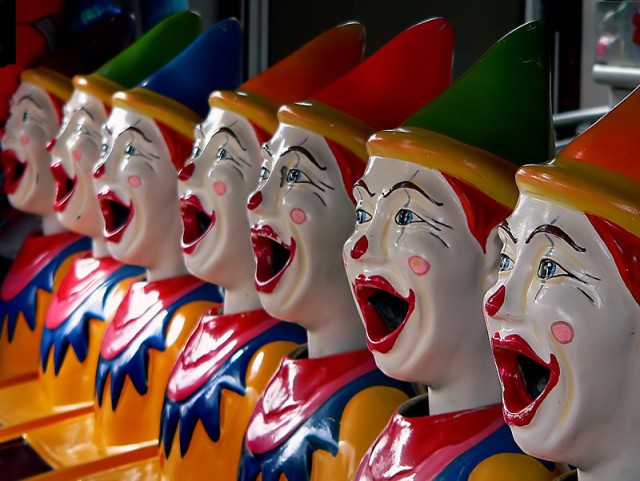 The Republicans, in the wake of the most devastating testimony yet in the impeachment inquiry, are pounding away at the table. They’re doing it with typical Republican buffoonery, but that doesn’t mean they won’t break something.

END_OF_DOCUMENT_TOKEN_TO_BE_REPLACED 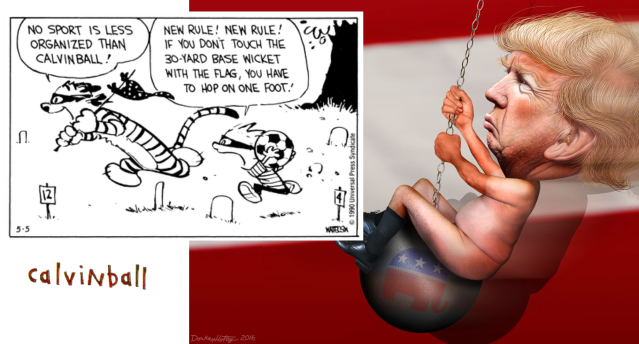 We have been awash in analyses of the recent letter to Congress penned by White House Counsel Pat Cipollone. In it, Cipollone outlines the Mis-Administration’s “reasoning” for why it will refuse to participate with Congress’ impeachment inquiry.

This flood of analysis comes mostly from Constitutional scholars and features detailed dives into the legal abyss, which can leave one’s head spinning. (Although some are quite amusing. My favorite came from a George Mason Law School professor, who said Cipollone “must have been sick the day they taught law at his law school.”)

But I have a simple approach to help everyone understand exactly what’s going on. Just think of the U.S. Constitution as Calvinball.

END_OF_DOCUMENT_TOKEN_TO_BE_REPLACED

The latest installment of Other Voices TV was taped just last night, making it just in time for the 150th anniversary of Gandhi’s birth today (10/2/1869). The basic thrust of the program was to discuss the upcoming conference at Stanford University called The Gandhi-King Global Initiative, an effort to forge an international network of organizations and activists dedicated to nonviolent struggle for human rights. And we did talk about the conference, but we also reviewed the personal journeys of Gandhi and King as they developed their own ideas about nonviolent resistance. My guest was Clay Carson, the founding director of the Martin Luther King, Jr. Research and Education Institute at Stanford.

I thought one observation that Clay made was quite interesting: that Gandhi and King made their significant impacts on their respective societies in remarkably different time scales. Gandhi came to activism relatively late in life, met with limited success early on, but kept at it over a long period of time. King, alternatively, started young and had a very short period of activism (12 years) before he was assassinated. Moral of the story: there is no how-to guide for activism.

I interviewed Clay once before, back in 2014 for a program marking the 50th anniversary of Freedom Summer (1964). It remains one of my favorite OV programs. You can see it here. The Freedom Summer episode was taped before the studio went all HD and it’s a bit jarring to see it today in comparison with our current video quality. But still well worth your time (as is the current episode, of course).